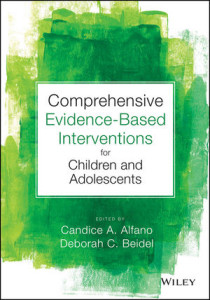 This excerpt is taken from the 2014 edition of Comprehensive Evidence Based Interventions for Children and Adolescents, edited by Candice A. Alfano and Deborah C. Biedel.

From Chapter 16:  As discussed, treatment approaches for elimination disorders are understudied. From the available evidence, it appears as if a combination of medical and behavioral management is most effective.  However, limitations associated with these approaches preclude their routine use in clinical settings. The combination of behavioral intervention with medical management requires expertise in both arenas (e.g., medical knowledge about defecation dynamics and laxative therapy, psychological knowledge relevant to intensive behavioral management, child development, and family systems), which few practitioners possess (Ritterband et al., 2003). Additionally, time and cost associated with medical appointments, as well as potential psychosocial implications such as embarrassment, serve as salient barriers to more widespread implementation of these interventions (Ritterband et al., 2003).

To address these challenges, a fully automated Internet-based version of ETT, entitled UCanPoopToo, was created to promote increased access for parents seeking treatment for their children with encopresis. The initial version of the 3-week program was designed for parents and children to complete together and consisted of educational content delivered via three core modules focusing on the anatomy and pathophysiology involved in defecation, bowel cleanout and laxative therapy, and behavioral treatment of encopresis. The program was designed to be engaging and interactive and, thus, incorporated numerous illustrations, animated tutorials, and reinforcing quizzes (Ritterband et al., 2003). Initial findings suggest this Internet intervention is a promising method for the delivery of enhanced behavioral treatment of encopresis (Ritterband et al., 2003). Specifically, children who participated in the Internet-based intervention demonstrated reduced frequency of fecal soiling (i.e., from an average of 6 fecal accidents per week to an average of 0.5 accidents per week after the intervention), increased defecation in the toilet, and increased self-initiated trips to the bathroom as compared to controls receiving routine care from their primary care physician. The cure rate was 70% for children who received the Internet intervention compared to 45% for controls.

More recently, UCanPoopToo underwent a revision to incorporate additional educational content, online diaries, and arcade-style video games used as a reward for completing the educational components of the program (Ritterband et al., 2013). A 1-week follow-up was also added to the intervention, lengthening it to a total of 4 weeks. Consistent with previous findings, results from a larger randomized controlled trial indicate that children who received the intervention in conjunction with routine care not only had significantly fewer fecal accidents at postintervention compared to those who had received only routine care, but they had fewer accidents at 1-year follow-up as well (Ritterband et al., 2013). Specifically, children who used the UCanPoopToo intervention demonstrated a 50% reduction in fecal accidents at 4 to 6 weeks as compared to controls. They also experienced a gain in encopresis-specific knowledge. The majority of children and their parents liked the program and perceived it to be useful, convenient, easy to use, and understandable. Clinically, the rapid gains attained through the program are notable given the chronicity of the condition for these youth, and they underscore the potential of the intervention as an adjunctive component to treatment, particularly for families with limited resources and for providers with limited expertise in the behavioral treatment of encopresis. A third national trial is under way and is in the final phase of data collection.

A full version of this publication can be found:  http://www.wiley.com/WileyCDA/WileyTitle/productCd-1118487567.html

This chapter can be viewed in PDF form: Chapter 16 – Elimination Disorders